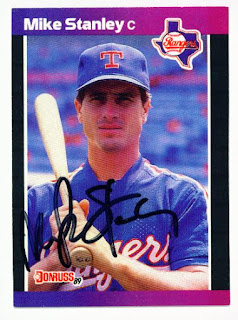 Today's card really has no connection to the topic of this post. It brings back memories for me though. Mike Stanley signed this 1989 Donruss card through the mail for me back in the early 1990's. It was one of the first through the mail success I had.

Well, the Rangers win streak ended last night in Cleveland and they are back at home tonight after a nine game, three city road trip. They come home with a 7-2 trip and a record that's now one game under .500. Not too bad for a team most had written off.

Prince Fielder has been on fire. After hitting well for average from the get go, he's now adding power and launching moonshots like the Prince of old. The defense and pitching have tightened up and the rest of the lineup has finally joined Fielder in producing. Makes for a fun team to watch. Are they a contender? Not yet and they may not be one this year. They are playing much better ball than a few weeks ago though and at least may be able to avoid the AL West cellar.

Not all the players returning to Arlington were with them team when it left and not all the guys who left are returning right yet. Neftali Feliz is on the disabled list and Jake Smolenski is back in the minors. They have been replaced by Josh Hamilton and Jon Edwards. Texas also sent outfielder Carlos Peguero to the Red Sox for cash yesterday.

In the meantime former Rangers manager Ron Washington returned to Major League baseball. He's back in his old position as a coach with the Oakland A's. The A's owe part of their last place position to a huge number of defensive errors and are hoping Wash can help control the bleeding. It's good to see Ron back in the saddle and I wish him success, except against Texas.
Posted by Spiff at 11:32 AM