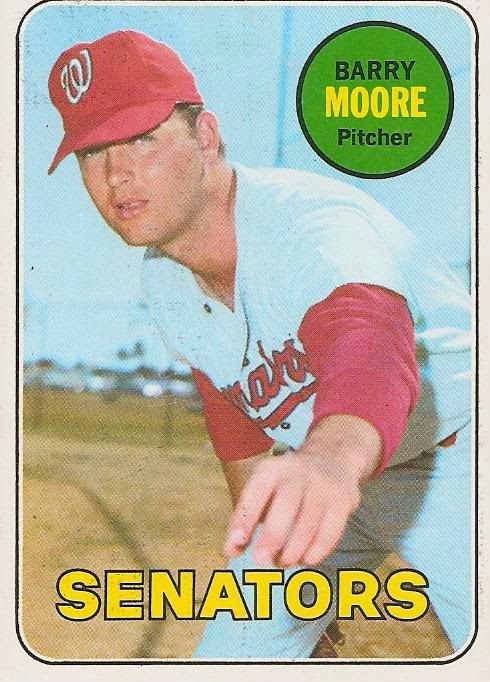 If anyone out there is wondering where the inspiration for the Rangers red uniforms came from, Barry Moore has a clue for you on card 639 of the 1969 Topps set.

Moore was a lefty control specialist who relied on his curveball for success. When it was working it worked well, he won three of his last four decisions in 1968. Unfortunately it wasn't always working and Moore battled control problems in 1966 and 1967. He seemed to figure things out a bit in 1968 and the Senators were looking for him to build on that success in 1969.

Working primarily as a starter, Moore made 31 appearances for the Senators in 1969. 25 of those were starts and he went the distance on four of them. Once again victimized by his control, Moore watched his ERA climb almost an entire point to 4.30. He issued 67 walks (25 more than the previous season) as opposed to 51 strikeouts (five fewer than 1968). That caused his strikeout to walk ratio to sag .57 points to 0.76. It also caused his WHIP to climb .075 points to 1.418. Barry ended the season with a 9-8 record.

Clearly 1969 had not been the breakout season that either Barry Moore or the Washington Senators were looking for. Apparently it convinced the Senators that Moore was not going to be able to conquer his control problems. On December 5, 1969 Washington sent Moore and fellow reliever Dennis Higgins to Cleveland in exchange for Horacio Pina, Dave Nelson, and Ron Law.
Posted by Spiff at 11:40 AM