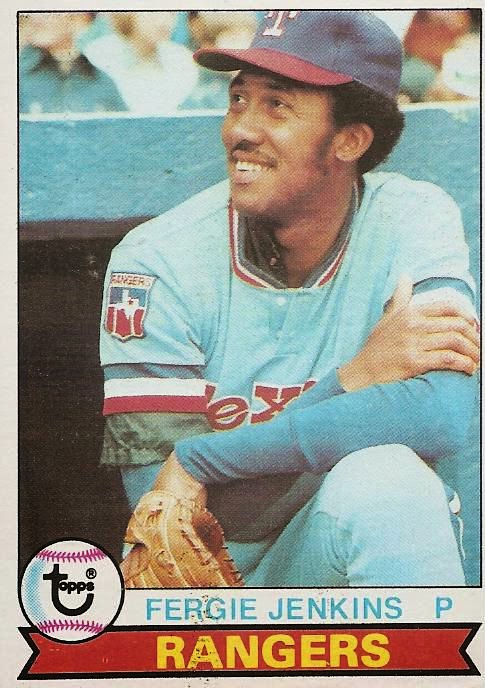 Apparently the Rangers re-thought their 1975 trade of Fergie Jenkins to the Red Sox. On December 14, 1977 Texas sent John Poloni and some cash to Boston to re-acquire Jenkins, shown here on card 544 of the 1979 Topps set.

Fergie returned with an 18-8 record in 1978 and posted a 3.04 ERA over 249 innings pitched. He struck out 157 opposing batters and garnered some Cy Young consideration. That's what Texas was wanting when they brought Jenkins back and they were looking for more in 1979.

Jenkins again served as the anchor of the rotation in 1979. He led the staff with 37 starts and 259 innings pitched. His 4.07 ERA and 1.286 WHIP were not real impressive but the WHIP was the lowest of the starting rotation. Jenkins also led the Texas pitching staff with 164 strikeouts, 10 complete games, and three shutouts. Always susceptible to the gofer ball, he also led the American League with 40 home runs allowed. Fergie ended the season with a 16-14 record.

Fergie Jenkins had a down season in 1979. The Rangers learned their lesson from 1975 though and decided to wait and see if he could bounce back in 1980. If Jenkins could lower his ERA and WHIP he could easily return to 1978 form, or even better. He'd done it before and the Rangers would just as soon he do it for them.