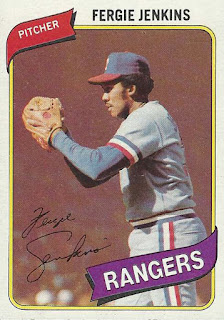 The Rangers were hoping for a good 1980 season from Fergie Jenkins following a down 1979 season. Jenkins, shown here on card 390 of the 1980 Topps set, had been an innings eater that year but his ERA topped four for the first time in his career.

Jenkins was involved in several headline occurrences during the 1980 season. On May 3rd in Arlington Fergie picked up the win. The victory over the Orioles gave Fergie his 100th win in the American League. He already had over 100 wins in the National League. That made him just the fourth pitcher in Major League history to win 100 games in both leagues.

On May 23rd Jenkins handcuffed his old beating boys, the Oakland A's, to pick up a 3-1 win. That victory gave him the 250th win of his career. He was officially in contention for a spot in Cooperstown.

Then came August 25th. The Rangers were en route to play the Toronto Blue Jays. As a native Canadian, Jenkins was returning home. Things got ugly at the airport though as customs officials discovered cocaine in Fergie's suitcase. He protested the drugs were not his and he had no idea where they came from. Unmoved by the now stale excuse, officers arrested Jenkins for possession of cocaine. MLB Commissioner Bowie Kuhn was not impressed. Two weeks after the arrest, Kuhn suspended Fergie from baseball for life. Jenkins appealed the suspension and it was overturned by an independent arbitrator on September 22nd. The ruling was unprecedented and gave Jenkins a new lease on his career.

The Rangers were less than impressed by Jenkins' arrest and suspension. There was an upside though. Perhaps the close call would give Fergie something to prove as he took the mound in 1981. A pitcher of Jenkins' caliber with extra motivation is never a bad thing.
Posted by Spiff at 12:10 PM