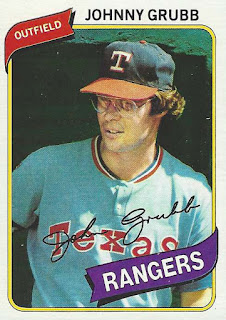 Building on a decent 1979 season, Johnny Grubb was planning on locking down a starting gig in the Rangers outfield in 1980. However, the Texas outfield was something of a merry-go-round and determining who was technically a full-timer is a bit difficult. Grubb, shown here on card 313 of the 1980 Topps set, was definitely in the mix though. Baseball-Reference.com gives him the starting right field nod.

All told, Johnny made 323 trips to the plate in 110 games for the Rangers in 1980. He posted a .277 batting average and a .374 on-base percentage. The average was up slightly from 1979 and the on-base percentage was up almost 25 points and good enough for second best among Rangers regulars. The fact that his 42 walks outnumbered the 35 times he struck out helped bump his on-base percentage up. Grubb hit 12 doubles, one triple, and nine home runs while accounting for 40 runs scored and 32 RBI.

Primarily a right fielder, Johnny played 454.2 innings there over 62 games. His four errors dropped his fielding percentage to .952, well below the league average .975. Grubb also played 113 innings in 18 games in left field. He muffed two plays there for a .938 fielding percentage, nowhere close to the league average .980. Nine games as the designated hitter rounded out the season totals.

One thing was for sure, the Rangers liked Johnny Grubb's bat. What probably cost him playing time in 1980 was his defense. If he could maintain his offensive stats and improve his defense to at least average, he had a good shot at a regular job. If he didn't get that done, he had another season of riding the merry-go-round to look forward to.
Posted by Spiff at 10:07 AM

Players on the 1979 Rangers used to jokingly say after games, "Let's Grubb." They meant that it was time to eat.

I can see where Johnny would have had to put up with some kidding about his name.