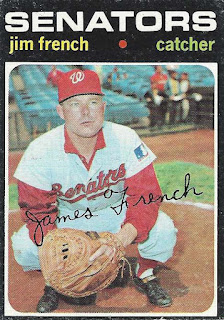 Jim French appears in a classic catching pose on the front of card 399 in the 1971 Topps set. He does not seem all that thrilled though. Perhaps he had reason.

French had been a backup each of the previous six seasons he played for the Senators. That assignment would continue in 1971 as he started the season as backup to first-string catcher Paul Casanova.

Jim appeared in 14 games for Washington, all at catcher. Over the 115.1 innings he caught, French committed just one error. With his limited playing time it was enough to drop his fielding percentage to .985. That wasn't too far off the league average .988. French was known for his ability to control the running game and that continued in 1971. He caught four of the eight runners who tried to steal on him and his 50% caught stealing rate was well above the league average 39%.

Jim's defense had never been a problem. His bat is what plagued him. That also continued in 1971. In 49 trips to the plate French posted a light .149 batting average and a dismal .271 on-base percentage. He hit just one extra base hit, a double. Jim walked and struck out seven time for an exact balance. He scored six runs while bumping in just four RBI. Even though he was not known as a good hitter, these numbers were distressingly low.

Casanova had the starting job locked down. Unfortunately for French, rookie Dick Billings was making a push to unseat Casanova. In the process he also unseated French. Following an 0-for-4 game on May 14, 1971, the Senators sent Jim down to Triple A Denver. He played just six games there and was lent to the Braves for 53 games at their Triple A affiliate before ending the season in the minors.

On September 27, 1971 the Washington Senators released Jim French. It marked the end of his playing career and made this card his last.
Posted by Spiff at 10:36 AM