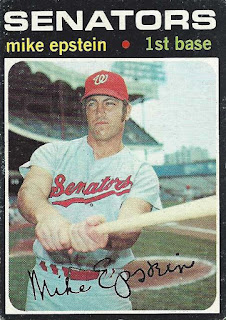 Happy new year folks. Hope 2015 ended well for you and 2016 is starting off on the right note. For Texas Rangers Cards it's going to start off with a look back to the final year of the Washington Senators.

First off, you gotta like the sideburns Mike Epstein is displaying on card 655 of the 1971 Topps set. Classic 70's look there. Mike had a bit of a downer season in 1970, following a great year in 1969. That got him on the front office radar as a player who might be trade material. However, Epstein still entered the season as the starting first baseman for Washington.

Mike ended up playing in 24 games for the Senators in 1971, all at first base. He continued his good defense there with just two errors in 208 innings for a .992 fielding percentage. That was exactly the league average.

In those 24 games, Epstein made 101 trips to the plate and posted a .247 batting average. That, and his .366 on-base percentage, were slightly lower than the previous season. He walked 12 times and struck out 31 times. The power was slow coming that spring as he had just one double, one triple, and one home run.

The cash strapped Senators were always on the lookout for a deal that involved money coming in. Oakland was willing to work with them. On May 8, 1971 Washington set Epstein and reliever Darold Knowles to the A's in exchange for Frank Fernandez, Paul Lindblad, Don Mincher, and cash. The trade turned out great for Epstein. He got to the post-season later that year and again in 1972 when he won a ring with the A's. In November of 1972 Oakland traded Epstein to Texas straight up for Horacio Pina. That stint with the franchise would not last as long as the first. On May 20, 1973 the Rangers sent Mike back to California, along with Rich Hand and Rick Stelmaszek. This time the trade was to the Angels, who sent Lloyd Allen and Jim Spencer back in return.
Posted by Spiff at 10:51 AM