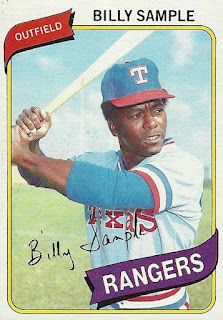 After the first couple of innings last night I thought I was going to have a win to talk about. However, since the pitching staff managed to blow the game it's a good time to continue with the 1980 team.

Outfielder Billy Sample appears today on card 458 of the 1980 Topps set. Sample was coming off a pretty impressive rookie season in 1979 and the Rangers were hoping to see it continue in 1980. Unfortunately Billy started off the season with an 0-for-10 slump and didn't get his batting average above .200 until late July.

All told in 1980, Sample appeared in 99 games and made 234 trips to the plate. He managed to get his batting average up to .260 by season's end. He walked 18 times while striking out 15 times to move his on-base percentage to .335. Sample scored 29 runs while knocking in just 19 RBI. He did get ten doubles and four home runs but no triples.

1980 was a let down season for Billy Sample. The Rangers still had high hopes for their young outfielder but he needed to show that 1980 was simply a sophomore slump. If he could get his bat going in 1981, Sample's defense would make help make him an attractive full-time option in the Texas outfield.
Posted by Spiff at 11:04 AM