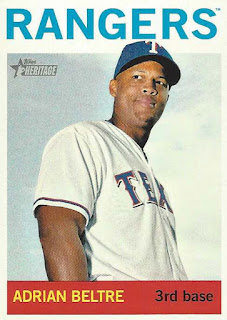 The A's struck first last night as Danny Valencia hammered a two-run homer off Martin Perez in the first inning. Texas scored one in the bottom of the first on a solo shot by Ian Desmond but ended up trailing for most of the game. Indeed, the A's appeared to be firmly in the driver's seat for most of the contest.

Oakland scored three more runs off Perez in the top of the third to run his total to five runs given up over the six innings he pitched. Due to an errant throw by Elvis Andrus in the first, only three of those runs were earned.

Matt Bush came in to start the seventh inning with the Rangers down 5-4. Another fielding miscue, this one by Delino DeShields, allowed the A's to pick up an unearned insurance run. In the bottom of the inning, with the score 6-4 Oakland, Adrian Beltre squeezed in a solo homer down the right field foul line. Texas was unable to add any runs to that through the rest of the seventh and in the eighth inning. Fortunately, Matt Bush matched that and held the A's scoreless as well through the top of the eight. Jake Diekman blanked Oakland in the top of the ninth.

With one out in the bottom of the ninth Nomar Mazara blooped a broken bat single to right field. Ryan Rua came in to run for Maz. Oakland closer Ryan Madson got Desmond to strike out for the second out. That brought up Beltre, shown here on card 444 of the 2013 Topps Heritage set, with two in the mud. Beltre blasted the first pitch he saw over the center field fence for a two-run walk-off home run. Final: 7-6 Texas. It was the first Rangers walk-off in at least a month.

Awesome to see the team hang in there and battle back. Nice job by the bullpen to keep the game close and give the offense a chance to win it. Always great to see Beltre blast two homers in a game. The guys need to cut down on the defensive errors though. Beltre was right when he said in his post-game interview that the defense has been letting the pitchers down and making them work harder. Some better defense might help the pitching staff put things back together that much quicker.
Posted by Spiff at 10:46 AM