Why I was away. 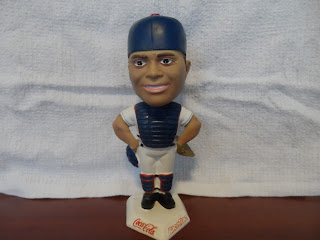 Well, it's been 11 days since I posted and I'm sure some of you are wondering if I fell off the face of the earth, or at least off the Rangers bandwagon. I suppose I owe you an explanation of my absence. I asked 2001 SGA bobblehead Pudge if I did and he shook his head yes so here goes.

On July 7th eleven police officers were gunned down in Dallas, Texas. Five of them died. A few days later a Missouri officer was ambushed and critically injured. Then an off-duty officer was forced to defend his family and home against a home invader. Yesterday four more officers were shot in Baton Rouge, Lousiana and two of them are dead. Frankly, those events have hit me hard. Very hard.

I try not to mention my profession to people I don't know well but, I am a law enforcement officer. I was stunned by the losses these past days and by the vitriol and hate displayed against police by our society. I knew things weren't good and I knew the President disliked us. For the President and others to figuratively stand on the graves of the fallen officers to scream their talking points was beyond angering. That's not up for debate. It was and is. You disagree, you do so elsewhere.

As I tried to shield my children from the news and watched other officers' children mourn for them, my motivation to write about the Rangers drained away. I needed some time to get my thoughts back together. That's where I've been. Thought you deserved to know and I appreciate you sticking around in spite of the lack of recent posts. I'm going to try to get back in the saddle and go back to talking about the Rangers and their cards. It's a manner of relaxation for me and a way to let the stress go a little. That and Pudge says I should get back to it.
Posted by Spiff at 3:04 PM

Keeping you, your family and your brothers and sisters in blue in my prayers. My cousin, who is essentially my brother, is a detective in Mesquite and I worry about him every day now. God bless you all, my friend.

My Dad and brother are both in law enforcement. Hope you can find some comfort in the coming days.

Thanks guys. Means a lot.