Finding the long-lost W's in KC. 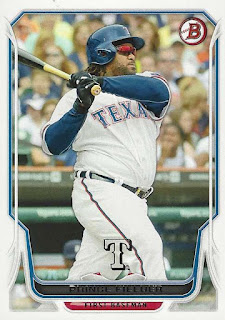 With Shin-Soo Choo and Prince Fielder, shown here on card 136 of the 2014 Bowman set, headed to the Disabled List late last week things looked kind of bleak for the Rangers. I figured the chances were slim of having a win to write about today. Instead the boys won two of three in Kansas City to snap their losing skid and take the series against the Royals. That's some very welcome good news for Rangers fans.

Cole Hamels won the game on Saturday to break the losing streak. Yesterday afternoon A.J. Griffin took the hill to try to get Texas a series win. Griffin lasted five innings and gave up one run. He didn't get a decision. As a matter of fact, when A.J. left the game he was on the hook for the loss.

In the top of the sixth Mitch Moreland singled in Adrian Beltre to tie up the game and get Griffin off the hook. Alex Claudio came in and worked a scoreless inning in relief. In the top of the seventh inning recent (re)call-up Delino DeShields Jr hammered a solo shot home run to lead off the inning and put the Rangers on top. With Keone Kela, Jake Diekman, and Sam Dyson each working a scoreless inning, that was all she wrote for Kansas City. Final: 2-1 Texas.

Couple of things were very heartening about yesterday's game. First and foremost, the pitching. Griffin didn't get as deep as one might like but he also only gave up one run. Four different relievers managed to keep the Royals off the board after that. That's the kind of thing we didn't see much of during the losing streak and it's the sort of performances that the club needs to get going again. Second positive was Delino DeShields. After struggling and getting sent down to Triple A early in the season, Delino had to wait his turn to be called back up to the big club. Now we get to see if his time in Round Rock benefited DeShields enough for him to keep his spot on the roster. Yesterday was a good sign from the young center fielder.
Posted by Spiff at 5:09 PM