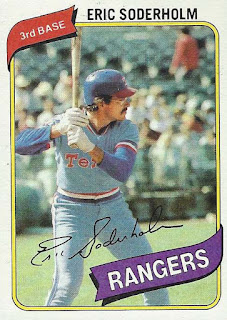 By the time Eric Soderholm appeared on card #441 of the 1980 Topps set, he was no longer wearing a Rangers uniform. Texas picked up the veteran third baseman from the White Sox on June 15, 1979 in exchange for Ed Farmer and Gary Holle.

Soderholm played in 63 games for the Rangers. Texas picked him up to help fill in for ailing third baseman Buddy Bell as Bell struggled through his injury-plagued season. All told Eric would appear in 37 games at third base, 14 games as the designated hitter, and two games at first base for the Rangers. He was serviceable but below the league average at both third and first.

In his 166 plate appearances Soderholm walked 12 times and struck out nine times en route to a .272 batting average and a .325 on-base percentage. He scored 15 runs and knocked in 19 RBI. He also hit six doubles and four home runs.

On November 14, 1979 the Rangers traded Eric to the Yankees for Amos Lewis and Ricky Burdette. Neither one of those players would ever make it to the Majors. Soderholm would play through the end of the 1980 season as a backup with the Yankees and see some some action in the American League Championship Series as New York fell to the Royals. Eric would miss the entire 1981 season before the Yanks released him on October 13, 1981.
Posted by Spiff at 10:49 AM