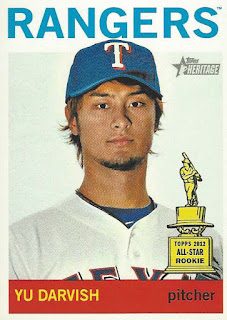 Last night the Rangers kicked off a three game series against the Seattle Mariners. From this point on, 24 of the remaining 30 games in the season are against other American League West teams. If somebody is going to try to make a move to knock Texas out of first place, it's now or never.

The Mariners had to go through Yu Darvish, shown here on card 125 of the 2013 Topps Heritage set, last night to beat the Rangers. They weren't able to do it. In 6.2 innings Darvish struck out nine while allowing three earned runs. To be fair, two of those runs crossed home after Yu was relieved by an ineffective Jake Diekman with two outs in the seventh inning.

Keone Kela took over from Diekman to end the seventh with no further damage. Kela also handled the eighth without incident. Sam Dyson came on in the ninth and notched his 30th save of the season.

While all that was going on, the offense was not silent. The Rangers scoring charge was led by Carlos Beltran, whom I do not have a Rangers card of. Carlos went 3-for-4 at the plate with a home run, double, and two RBI. Ian Desmond and Adrian Beltre also chimed in with doubles while Nomar Mazara contributed a triple. All told, the Rangers put six runs on the board. Enough for a 6-3 victory.

Always good to down a division foe. Nice effort by Darvish to tamp down the potent Seattle offense. Also a very good night for Beltran to break out of career-worst slump. I was beginning to wonder if he had fallen off the age cliff. Diekman is not really a concern with his troubles, after all it was his third outing in a row. He probably just needs a day or two off to be back to the Jake Diekman Rangers fans are used to.
Posted by Spiff at 10:18 AM