Back on the Road Again. 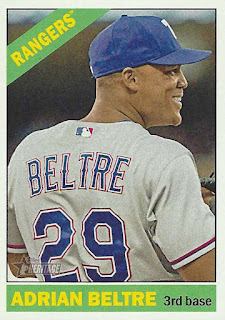 Well, recently my family's trusty minivan finally gave up the ghost as the transmission failed. With the 13 year old van at a little over 180,000 miles, it was time for a replacement rather than a repair. It took some looking around, comparing, and shopping but we now have a new (to us) van and are back on the road.

The Rangers are also back on the road, kicking off another road trip last night in Tampa. Texas sent Cole Hamels to the mound while the Rays countered with Matt Andriese. Hamels put on an outstanding performance, chasing a no-hitter through five innings before losing it in the sixth. He had to settle for three hits in 7.1 innings while striking out ten and allowing just one run. A gem. Unfortunately, I have no Rangers cards of Cole Hamels, otherwise he would have been the card of the day today.

Tony Barnette relieved Hamels in the seventh but had problems and lasted just a third of an inning while allowing one run. Jake Diekman finished the game off, keeping Tampa Bay off the board for an inning and a third.

While all that was going on the offense was not silent. Well, at least after the fourth inning they weren't. With the score at 0-0 heading into the fifth, the Rangers were looking for a little offense to back Hamels on the mound. Mitch Moreland led off the inning with a solo home run to break the tie. Ian Desmond followed up with a single that scored Elvis Andrus from first to give the Rangers a 2-0 lead.

In the sixth inning the wheels really came off for the Rays pitching. Adrian Beltre, shown here on card 446 of the 2015 Topps Heritage set, hammered a long ball to lead off the inning. The Rangers reset the table for Nomar Mazara and he shot a single to right field to score Jonathan Lucroy. Jurickson Profar ended the scoring by walking with the bases loaded to force in Moreland. All told the Rangers sent nine men to the plate during the inning.

Adrian Beltre capped off the scoring for Texas for the night when he led off the seventh inning with another home run. It was his second of the night and the third inning in a row the Rangers led off with a home run. Final score: Texas - 6, Tampa Bay - 2.

The Rangers got some good stuff going last night. Hamels was dominant and it was nice to see the bullpen get a bit of a break. Also very good to see the offense show up and back Hamels. If the team can keep the bats going they should be able to have a pretty good trip.
Posted by Spiff at 11:03 AM