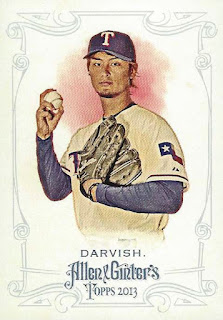 Darvish had a rough night last night on the mound against the Reds. He pitched just six innings, allowing five runs. Only three of those five runs were earned but Yu battled his control as he walked five and hit a batter while striking out five. That's not normal Darvish.

Darvish taking his cuts at the plate is not normal Darvish either but the game was in Cincinnati and so National League rules were in place. It is generally accepted that the American League pitchers come off poorly on offense as compared to the National League hurlers. Last night was the exception as Yu hammered a solo shot in the fifth inning. Ian Desmond followed up with a long ball of his own to go back-to-back with Darvish.

Unfortunately, Yu's control struggles and some defensive miscues by Texas assured that his home run would not be the difference maker in the game. While the Rangers bullpen put up three scoreless innings in relief, the offense was not dependent on Darvish and Desmond alone. Nomar Mazara started off the scoring for the night with a three run bomb in the second inning.

By the time the eighth inning rolled around the score stood at 5-5. Desmond started off the Rangers rally by getting hit by a pitch. He stole second to advance into scoring position. Adrian Beltre, hero of so many games, came through again for the Rangers with a double that scored Desmond to give Texas a 6-5 lead that they held on to for the rest of the game.

While Darvish's pitching struggles are frustrating, they are not overly alarming. Yu is still on the road back from his Tommy John Surgery and bumps are to be expected. Very good to see the offense arrive early and pick Darvish up. Too often the guys have struggled to score runs with Yu on the mound. Tonight the team kicks off a tough four game set at home against the Cleveland Indians. Cole Hamels takes the mound against the Tribe, who are one win behind the Rangers for the best record in the American League.
Posted by Spiff at 11:04 AM