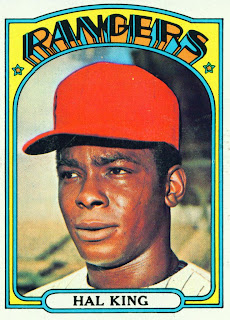 With the wheels coming off for the Rangers and the Angels creeping up on them in the standings, I thought it might be a good time to take a break. Let's take a look at the next card in the 1972 Topps Rangers team set.

Today we have card number 598, catcher Hal King. At first I couldn't figure out how Hal managed to avoid the awkward angle shot that bedeviled so many of his teammates. Then I saw the pinstripes on his jersey. A quick check reveals that Hal was traded to the Rangers in December of 1971. The Braves shipped him over in exchange for catcher Paul Casanova. Apparently the deal was one backstop for another.

The Rangers were Hal's fifth and next to last team. His career started when he was signed by the Angels in 1965. Before he made it to the Majors though the Astros drafted him in the minor league draft of 1966. He made the big time the next year but was used sparingly for a couple of seasons before being dealt to the Red Sox prior to the 1969 season. Boston promptly assigned him to the minors where the Braves snagged him in the Rule 5 draft of 1969.

Hal caught Brave's pitching for two seasons before being sent to Texas in December of 1971. After just one season, the Rangers sent King and Jim Driscoll to the Reds for pitcher Jim Merritt. Hal would play two seasons for the Redlegs before the end of his career. Six teams in nine years. Quite the traveling man.
Posted by Spiff at 7:30 AM

Wow, now that is a RED CAP.