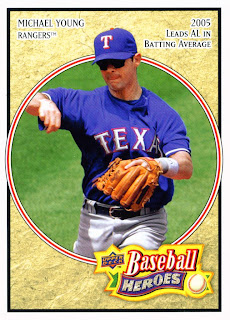 The Rangers' offense has been anemic at best the first part of this homestand. After going toe-to-toe with the Yanks and BoSox the life seems to have been sucked out of the Texas bats. As of yesterday the team's average is just .223. Not real good for a team usually known more for its offense than pitching and defense. Only one player in the starting nine yesterday is hitting over .300. Michael Young, pictured here on card number 167 of the 2008 Upper Deck Baseball Heroes set, is staying the course at .316 on the season. So far he's the lone consistent bright spot on the offensive side of things. It would be nice to see several guys at that level. It's looking like Rudy Jaramillo has his work cut out for him.

A few other notes:

Frankie Francisco is back on the DL. This time it's retroactive to June 4th and he is eligible to come off on Friday. Not sure if he'll be back then or not.

Ivan Rodriguez is slated to catch and pass Carlton Fisk for the most MLB games caught. He should do the trick on Tuesday and Wednesday when the Astros come to Arlington to finish off the season series with the Rangers. Nice place for it to happen.

Baseball is trying to get back into the Olympics in 2016. Apparently MLB has promised to not compete with medal matches. The International Olympic Committee is looking at adding two sports in 2016. Baseball is in competition with softball, karate, roller sports, rugby sevens, and squash. Roller sports and squash?
Posted by Spiff at 5:12 PM

The thing about baseball and softball is that it just came off the roster - they would put it straight back?

Madding - Yeah, I hope they can wake it up.

David - Apparently the option is there and being seriously considered. Not sure what the point is of dropping them for just one cycle though.