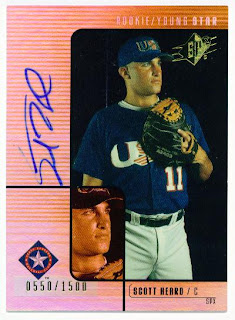 The MLB draft is in full swing and the Rangers appear to have drafted a couple of prime pitching possibilities. I say possibilities because I find it hard to call high school pitchers prospects.

In honor of the draft I have decided to post this 2000 SPx card of the Rangers 2000 first round pick. The card is numbered to 1500. Scott Heard's career was numbered to four. Four years that is. He lasted four years in the minors and never made it above Single A ball.

Hopefully this year's picks work out a bit better. So far the Rangers seem to be running pitcher heavy. That would seem to be a sound strategy. As the old adage says, good pitching beats good hitting. Need to make sure to keep an eye on the position players as well though.

One player that the club has snagged that is not a pitcher is Ruben Sierra Jr. Supposedly he has slightly less power than his father but more speed. He plays outfield like his father and apparently has quite the outfield arm. No word yet on if he takes after his father's surly attitude and pretending to not be able to speak English.
Posted by Spiff at 12:19 PM