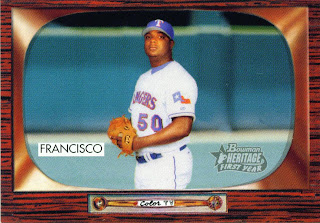 Frank Francisco allowed his first run of the season last night. Frank, seen here on card number 284 of the 2004 Bowman Heritage set, hadn't given up a run in the first 17.2 innings he had pitched. This one cost him his first blown save. Well, perfection isn't a human attribute and at least the guys took three of four from the A's. I still have confidence in Frank and will still sit easier with him closing than I did with C.J. Wilson last year.

The Rangers are off today. Most of them are traveling to New York for the series against the Evil Empire that starts tomorrow. This road trip is going to be a real test. Starting in the Belly of the Beast and then on to Bean Town to see the Sox. Will be tough, could be winnable.

Josh Hamilton may not be traveling. He is undergoing a MRI to determine the cause of his abdominal pain. Josh hasn't been the same since his death-defying catch against the Angels. Not sure what the problem might be. The possibility of the DL is being tossed about. I hope just a couple of days off will do the trick, the team needs him.

Speaking of the DL, Vicente Padilla is supposed to come off of it tomorrow and start against the Yanks. Hope he has his A game.
Posted by Spiff at 10:36 AM