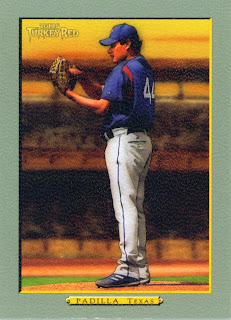 Vicente Padilla almost single-handedly snapped the Rangers' losing streak tonight in Arizona. Padilla, seen here on 2006 Turkey Red card number 546, hurled seven innings while holding the Diamondbacks to just one run on six hits. Thanks to some nice pitching by the bullpen, that was all the offense Arizona could muster.

It was a good thing that Padilla was on tonight. He got just two runs to work with. It was enough for him to out-duel the N.L. ERA leader, Dan Haren. The win should keep the Rangers tied for first with the Angels. As I write this Anaheim is leading the Rockies 9-3 in the bottom of the eighth. Probably a safe assumption that the Halos will be able to pull it out.

On a human interest note: the Redhawks, Texas' Triple A affiliate activated Orlando Hernandez today. I say this is a human interest note because I just don't see El Duque getting out of the minors. The guy may have been dominating in the past but he's 43 now and hasn't seen a Big League mound since 2007.
Posted by Spiff at 11:43 PM