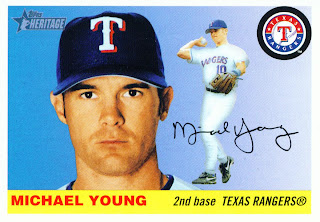 After a couple of games where it was seeming like the Rangers' bats were waking up, the bottom fell out. Following two weekend losses to the San Diego Padres the Rangers are now 1.5 games out of first.

The first loss was bad enough at 3-7. Yesterday's was just plain embarrassing. The Rangers wasted a great spot start by Tommy Hunter and lost 0-2 while only getting one hit. That is the first time that has happened in Arlington since 1992. That puts yesterday's game in the running for the worst home game in 17 years. Ugly.

If I was Tommy Hunter I would be pretty offended. Hunter's ERA after the game is still well over a point below the Padres starting pitcher. Combine that with 2.2 scoreless innings from the Texas bullpen and the game should have been a win had the bats been present.

Since I couldn't find a card of Tommy Hunter, I decided to post Michael Young's 2004 Topps Heritage card, number 206. Mike saved the Rangers from being no hit with his single. He also collected a walk, one of only three the Rangers picked up. Still the lone member of the starting nine to be hitting over .300 Young is rapidly becoming the lone offensive bright spot. Hopefully that changes.
Posted by Spiff at 11:49 AM

Tampa had a bit of a wobble heading into last year's All Star Break and ended up doing ok. They just need to maintain a clear head.

I thought it was a pretty good weekend, but then I'm a Padres fan.