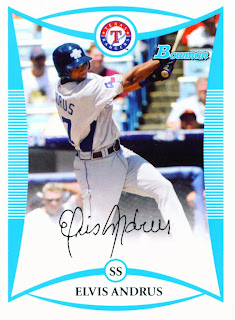 Sorry about the lack of a post yesterday. Took Mrs. Spiff out for our anniversary so that took up my afternoon/evening.

Lots of good stuff going on the past couple of days for the Rangers. After stumbling against the Blue Jays and then having a game rained out they have managed to come back up to ten over .500. Good pitching and some defensive gems have been the straw stirring the drink (to borrow Reggie's phrase).

On Thursday the Rangers followed up the rain out by taking a pitching duel from the Jays. The final was 1-0 as Kevin Millwood notched his sixth win. There was plenty of defense on both sides. The best play of the game should probably go to Elvis Andrus. Andrus, pictured here on card number BDPP89 of the 2008 Bowman set, made a highlight reel play when he went over a wall to snag a pop foul. Quite the impressive play.

Yesterday when I checked the mail I found an 800 card box waiting for me. It was filled with assorted Rangers from Jim over at GCRL. Jim had sent me an email previously warning me that he was sending some Rangers my way to free up some space. The number that he sent was totally unexpected and much appreciated. Several holes were filled in my Rangers collection. Jim even managed to finish off the 1992 Stadium Club set. Thanks a bunch Jim, no way I can match the numbers you sent but I'll try and get something together for you to make it worth your while.

Last night Vicente Padilla and the bullpen managed a second shutout, the first time for back to back goose eggs since 1981. The bats came alive in this game though with the final score ending up 6-0.

This morning the mail brought an unexpected surprise from Matt at Heartbreaking Cards. Out of the blue Matt launched a small package of Rangers at me. I haven't had a chance to check them to see what all I need but I know there are several that will fit in nicely. Thanks Matt, the treat is much appreciated.

All in all a couple of great days, wins at both the ball park and the mail box.
Posted by Spiff at 4:46 PM

Huh, I was just going to see if you were up for another Rangers-Dodgers swap as my Rangers have been building up over the months.

But now that you have the gcrl package to deal with, you may want to hold on to those Dodgers.

Yeah, I need to repay GCRL first and then I'll try and get some Trolley Dodgers together for you.