Rangers heat up heading into July. 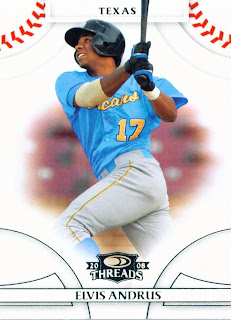 There is the possibility that the Rangers have broken out of their team wide slump. On Thursday they scored nine runs. That was the first time in 22 games that they scored more than six runs.

They followed that up last night by trouncing the Padres 12-2 in their third straight win. Perhaps the June drought is over. Not that I mind games that are low scoring, I actually prefer them to blowouts. What gets me is when the pitching staff gives up one or two runs and still loses. No need to waste good pitching performances. The guys certainly didn't waste Kevin Millwood's work last night.

It seemed like everyone got a good cut in last night at the plate. Hank Blalock and David Murphy homered. Kinsler and Salty managed doubles. Murphy led the team in RBI with three while three other guys came in with two each. Perhaps most notable were the six walks the team managed to collect. Taking pitches has been a problem in June and getting walks has been almost impossible. Very encouraging.

In the midst of all the fireworks perhaps the best performance was turned in by Elvis Andrus. Elvis, seen here on card number 100 of the 2008 Donruss Threads set, went 4 for 4. He had a triple, scored a run, and notched two RBI. Nice production out of the number nine batter.
Posted by Spiff at 12:22 PM