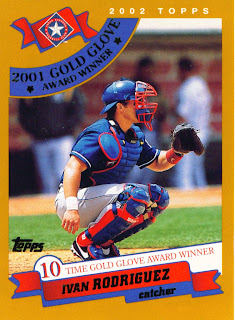 Ivan Rodriguez started at catcher tonight for the Astros as they came into town to face the Rangers. Not a big deal in and of itself perhaps. After all, Pudge has started a lot of games in his career. That is what makes this one so special though. When Ivan crouched behind the plate tonight it was the 2,226th game he had done so in.

That ties Pudge with Carlton Fisk for the most number of games caught in a career. In recognition I give you Ivan's 2002 Topps card, number 697 in the set. I like this card because it shows Pudge doing what he does best, catching.

Ironically, Fisk set his record in a game against the Rangers; one that Rodriguez called for Texas. At the time Ivan was busy swiping Fisk's nickname, if he plays tomorrow he will have the record as well.
Posted by Spiff at 8:14 PM

I never thought that record would be broken, but I'm glad that Ivan was the one to do it.