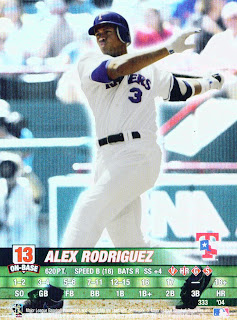 Alex Rodriguez hammered a double to help the Yankees top the Phillies last night 7-4. Alex, seen here on card number 333 of the 2004 MLB Showdown set, was also hit in the first inning by pitcher Joe Blanton. That makes the third time A-Rod has been plunked by Philly pitching during the World Series. Is it intentional or just the hurlers trying to go inside and going too far?

The win last night puts the Yankees to within one of winning the series. The Phillies would have to win three straight to pull off a comeback. Not to sound pessimistic but I doubt they can do it. I fear we will see a Yankee title and have to suffer through the off-season hearing about it.
Posted by Spiff at 1:20 PM

This is like the ALCS. They are back at home and it will be interesting to see how much of a factor the short rest is.