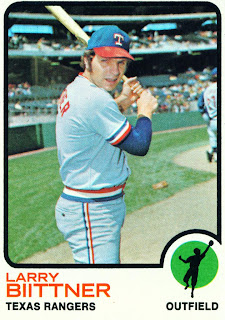 With 1972 in the books, the Rangers moved into their second season in Arlington. 1973 would also mark Larry Biittner's fourth season with the franchise.

Larry, shown here on card number 249 of the 1973 Topps set, served as a kind of utility backup in 83 games that season. He appeared in all three outfield positions, at first base, and as the designated hitter for the club.

In spite of the back of Larry's card referring to him as "One of the top hitters on the Rangers," he wasn't what might be called a threat at the plate. His on base percentage was .307 in 281 plate appearances. He walked 20 times but struck out 21 times. He had just 12 RBI and only one home run.
Posted by Spiff at 12:01 PM