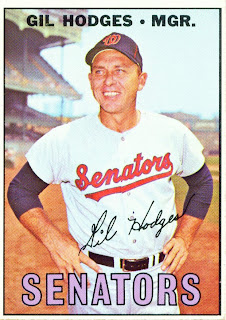 1967 was Hodges' fourth full season at the helm of the Senators. True to form the team improved yet again under his guidance from 8th to 6th place in the American League. The team won five more games than in 1966 and lost three less to end the season at 76-85. That tied them with the Baltimore Orioles at 15.5 games behind the Red Sox.

However, following the season Washington dealt Hodges back to the New York Mets for pitcher Bill Denehy and $100,000. That move would prove to be a mistake. After four seasons of improvement under Gil Hodges the Senators would fall off the proverbial cliff in 1968.
Posted by Spiff at 4:21 PM

Yeah, I like this card a lot and wish I had more from the set. Will have to remedy that at some point.