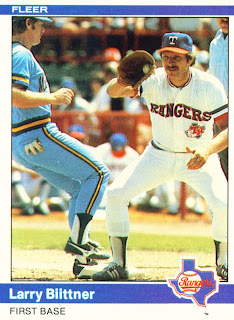 So here's Larry Biittner again. This time on his 1984 Fleer card during his second tour with the Rangers. Larry serves as a nice example of the next set I am posting a wantlist from. Now that I have run through the base Score sets it seemed like a good time to move on to Fleer. The 1981 Fleer wantlist is already posted and the next two team sets are complete. That brings us up to 1984. Here is what I need:

Just two cards needed here. One who will be well known to A's fans from the late 80's and the other who is not looked kindly on by Red Sox fans. If you have either (or any cards previously listed on wantlist posts) then shoot me an email. I am sure we can work out some sort of trade. Thanks!
Posted by Spiff at 4:14 PM

Holy smokes, one I have. I've got the Dent card for you.

Yow! Way cool man. I'll email you. Thanks a bunch!