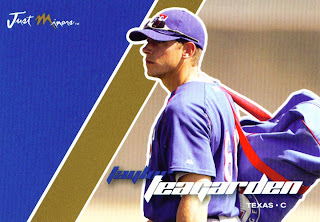 Less than three days until pitchers and catchers report for the Rangers! Look at Taylor Teagarden on card number 75 of the 2008 Just Minors Gold set (13/100). He's got his gear bag and is ready to roll.

He had better be ready going into Spring Training this year, this could be his chance. Jarrod Saltalamacchia says he'll be at 100 percent for the start of Spring Training but he is coming back from shoulder surgery. Ron Washington has told both catchers that the starting job is open and on the table.

Taylor had a chance last season when Salty went down but he muffed it offensively and Ivan Rodriguez became the go to guy. Ivan's gone now and if Taylor can get his bat in gear he could take the job away from Saltalamacchia. Jarrod's been working on his defense though so it could be a close race. As Washington says, "It's open competition, may the best man win."
Posted by Spiff at 2:00 PM

I am pulling for Taylor. This is a good problem to have as a team. Much better than not being happy with either option on your roster.

An excess of talent is always a good thing to have to deal with.