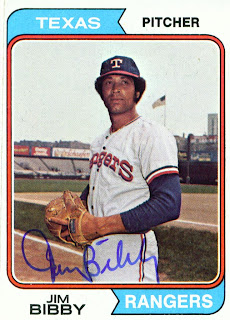 Jim had a solid 12 year Major League career. He appeared in the 1980 All-Star game and was part of the 1979 World Champion Pittsburg Pirates. In addition to the Bucs he also pitched for the Indians, Cardinals, and Rangers.

In 1973 Jim etched his name permanently in the annals of the Texas Rangers as he hurled the first no-hitter in Rangers history.

Many condolences to the Bibby family on their loss.
Posted by Spiff at 5:21 PM

Very good guy and great pitcher... Very interesting life he lived. He will be missed.