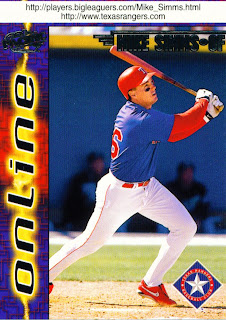 So I finally got some 2010 packs today of both Topps and Upper Deck. Got a code card for the Topps Million Card Giveaway. As I was entering the code I thought of the 1998 Pacific Online set. I am showing Mike Simms on card number 745 as an example.

How many folks other than me remember this set? I recall that at the time it came out that it had a rather high-tech mystic about it. Each card had the URL of the team featured and a URL (now dead) for that specific player. The back of the cards urged collectors to hop on line and get more information on the player and his team. The inserts in the set had special codes printed on the back that could be redeemed for prizes and points if I recall correctly. I remember thinking that this was the wave of the future, computers and cards merged together. Pacific appeared to have got a jump on the big boys.

Sadly I don't remember anything about the website these cards promoted. At the time the only access I had to the Internet was through dial-up and picture heavy sites were a no go. Apparently the set was also a no go, it disappeared after just one year.

At least dial-up is no longer an issue. I was able to to successfully redeem a 1973 Marty Pattin card from Topps. Marty's a Red Sox. Anyone got any Rangers up for trade?
Posted by Spiff at 9:15 PM