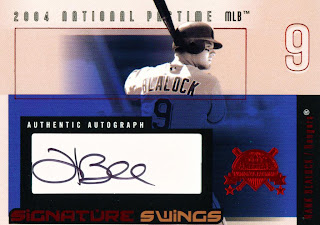 And it's not a sticker either! Oh, you thought maybe he had signed a contract for 2010? Well, not yet. I just thought I would show off this 2004 Fleer National Pastime Signature Swings card. It's got a nice auto of Hank Blalock and is numbered 29/109. Just came in today along with a couple of other Rangers game used and autos. I am thrilled to add it to the collection.

In other news, Frank Thomas has officially announced his retirement. He didn't play in 2009 though so that's not too big a game changer. Still sad to see him officially go. Gonna miss The Big Hurt.
Posted by Spiff at 7:51 PM