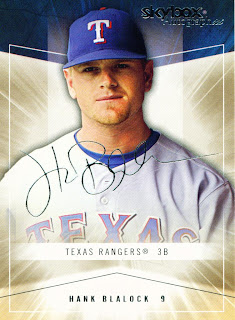 Down to just a few hours over eight days left until Spring Training kicks off. Ian Kinsler and Scott Feldman say they are looking forward to it. I know there are a lot of fans out there who can't wait and the teams are starting to try to gin up the support. I'm guessing that Hank Blalock, seen here on card number 55 of the 2005 Skybox Autographics set, isn't quite as excited as some.

Hank had a rough season last year. His average, on base percentage, and slugging percentages all dropped. His strikeout total more than doubled. The bright spot was that he played in as many games last season as in 2007 and 2008 combined. The downside was that only one of those games was at third base.

Blalock's shoulder is shot and he is now a first baseman/DH. He's still learning how to play first well so that makes those offensive numbers all the more troublesome. Even more so since Hank's a free agent this off-season. A lonely free agent apparently.

After eight seasons the Rangers have decided that Blalock is not an option. They have a decent infield and need right-handed bats to face the lefty pitching in the division. Hank takes his cuts from the left side of the plate.

I've been keeping an ear to the ground and haven't heard of any teams talking to The Hammer. Sure, there's always a few late signings just before Spring Training and even a few after things get started. The lack of interest isn't a good sign though. It's gonna be a short spring this year and time is short. One wonders if Hank is concerned that eight seasons may be all there is for him.
Posted by Spiff at 5:02 PM

I'd be nervous too. I think he'll be at Spring Training with some team.