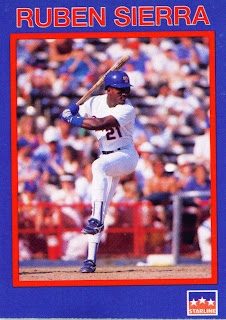 According to T.R. Sullivan the Rangers are bringing in some former players as guest instructors. Ruben Sierra, shown here on a terribly off-kilter 1990 Starline card, is one of them. Others include Rusty Greer, Jeff Russell, Mickey Tettleton, Pete O'Brien, Mark McLemore and Geno Petralli. Each of the guest instructors is staying about a week.

This is a neat aspect of Spring training. A good way to build the idea of tradition and team loyalty in an age where there isn't any. I especially like the idea of Pete O'Brien and Geno Petralli, both were better players than they are usually given credit for.

Kind of leery about Sierra though for a couple of reasons. The high leg kick is not really taught anymore is it? I can't really remember seeing it recently. Secondly, Texas needs all the fans it can get. Surly ballplayers really don't help. Ruben was very good at that part of the game but hopefully he won't pass it on to the current crop of Rangers. Of course Sierra was also a pretty phenomenal switch hitter for several years. If he can pass that on and avoid the attitude then I suppose it would be well worth the time.
Posted by Spiff at 7:05 PM

That is a very very skinny Ruben Sierra!