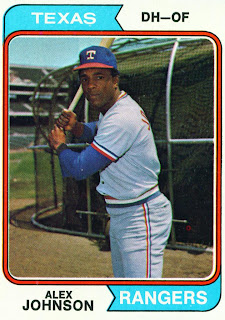 Alex Johnson was in his second season with the Rangers in 1974. He would play in 114 games with 81 being in left field and 32 at DH. Not quite sure where the last game went, perhaps a pinch-hitting appearance.

On defense Alex put in 669.1 innings in the field and posted a .956 fielding percentage, well below the league average .975. He committed eight errors in 182 chances. Interestingly, he also took part in two double plays.

At the plate Johnson would bat .287 in 486 plate appearances. His on-base percentage was .338. Both of those numbers were slight improvements over the previous season. Alex would hit just 4 home runs and 14 doubles but he still managed to knock in 41 runs. He also stole 20 bases while getting caught nine times. His strikeout to walk ratio wasn't that good with 59 K's to just 28 free passes.

On September 9, 1974 New York purchased Johnson's contract from Texas. He would play in just 62 games for the Yankees before being released in September of 1975. The Tigers would sign him in January of 1976 but let him go in December of the same year. That would be the end of the line for Alex Johnson's 13 year career.
Posted by Spiff at 4:07 PM