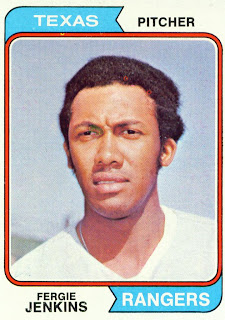 1974 was a banner year for Fergie Jenkins, shown here on card number 87 of the 1974 Topps set. After struggling in 1973 he was traded to Texas in October of that year. Some pundits thought his career was over.

Fergie surprised the doubters with a comeback year. He won 25 of his 41 starts to tie Catfish Hunter for the league best. He also led the league in complete games with 29 and came in second in shutouts with six. Five of his wins were against the defending champion Oakland A's.

Jenkins came in second in the Cy Young voting and fifth in MVP voting. He won the Comeback Player of the Year award though. He was also recognized as a leader on the team. Other pitchers gravitated to him for advice and he helped to line up speakers for the Rangers Sunday chapel in the clubhouse. All in all it had been a great year. The move to Texas seemed to have revitalized Fergie's career. Both he and the team hoped the trend would continue into 1975.
Posted by Spiff at 9:05 PM