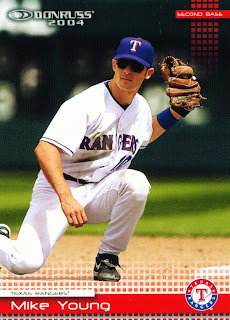 So Spring Training is finally here. For Rangers fans this is a unique experience as the team heads into camp as the defending American League Champions.

Of course there's lots of drama. How to replace Cliff Lee. Will Neftali Feliz move to the rotation? If so, who becomes the closer? Just exactly who will be in the starting rotation? Will Mitch Moreland hold down the first baseman's job? Will Tommy Hunter and Ian Kinsler make it through Spring Training without major injury issues?

Perhaps the biggest issue is if Michael Young, shown here on card number 204 of the 2004 Donruss set, will report to camp. He hasn't shown up yet but Ron Washington and Jon Daniels are expecting him to. Since the trade that Michael demanded hasn't materialized the club has little choice but to proceed as though Young will be arriving any minute and getting into the swing of things.

The ball is in Mike's hands now and the question is, what will he do? The team has tried to trade him but failed, due in part to the restrictive list of teams that he would go to. Now it's time to report for Spring Training and decisions have to be made. If he doesn't show he pretty much hands the Rangers an out. They can void his contract, save the $48 million they will owe him over the next three years, and remove a headache. He won't do that though, he'll come into camp sooner or later.

What is crucial is how he shows up. If he comes in professional and ready to work we may see bridges built and things smoothed over. After all, winning heals a lot of wounds. If Michael shows up sullen and resentful he could poison the rest of the team. Dealing with that will be a true test of Ron Washington's management skills. Hopefully the first scenario is the one that we see play out.
Posted by Spiff at 8:58 PM