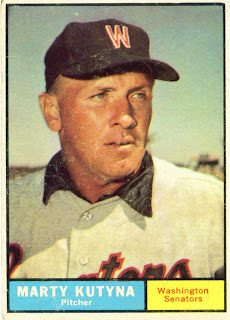 The Senators did not get Marty Kutyna, shown here on card number 546 of the 1961 Topps set, in the 1960 expansion draft. Instead Washington sent Haywood Sullivan and some cash to the Kansas City A's in trade for him.

The trade was fortunate for the Senators. In 1961 Kutyna was the workhorse of the bullpen. 46 of his 50 appearances that season were in relief and he tossed a total of 143 innings. Both of those numbers tops in the pen. The number of innings actually put Marty up with the starters. Marty also led the relief corps in strikeouts with 64. His 3.97 ERA and 1.364 WHIP weren't sparkling but they were good enough to be bullpen bests as well.

All in all Marty Kutyna hadn't had too bad of a season. He had pitched 81.1 innings more than he had for Kansas City in 1960. In the process he had seen his ERA move up just 0.03 points and had actually lowered his WHIP by 0.193. He was undoubtedly the ace of the bullpen in the Senators' inaugural season.
Posted by Spiff at 9:05 PM