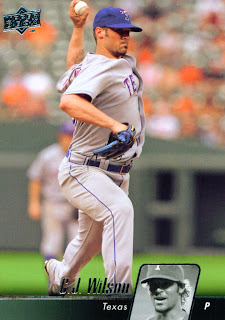 Looks like C.J. Wilson will be the Opening Day starter for the Rangers against the Red Sox. Wilson, seen here on card number 501 of the 2010 Upper Deck set, seems pretty excited about the assignment. About the only other option would have been Colby Lewis.

David Murphy is missing from camp. Gone back to Texas he has. Went back for the birth of his third child this morning. T.R. Sullivan says the kiddo's name is Cole and that everyone is ok. Murphy is expected back in camp in a couple of days.

Michael Young is also gone from camp. No, he wasn't traded for some pitching. He had to run home to attend to some family matters.

Matt Bush is scheduled to start an intra-squad game tomorrow. He's in camp on a minor league contract and seems to be doing better health-wise than Brandon Webb who is still not throwing off a mound.

Elvis Andrus now holds the Rangers record for most plate appearances without a home run. Ron Washington thinks that's just fine and that Elvis' defense and speed on the base paths are more than enough compensation. Some disagree. Not sure how they would have handled Ozzie Smith if he had been on the team.

Sunday the Rangers kick off their Spring Training games. They play the Royals at 1305 in Surprise. One step closer to Opening Day.
Posted by Spiff at 5:02 PM