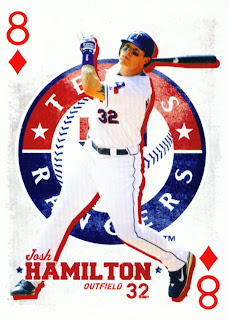 So the Rangers signed Josh Hamilton, shown here on an Academy Sports and Outdoors playing card, to a two year deal yesterday. Josh will get about $12 million a year. Texas avoids a potentially messy arbitration hearing. Nice to see the team get Hamilton signed before the start of Spring Training. I really like Hamilton and think he is a huge part of the Rangers' recent success.

So, there's some folks out there who are complaining that the Rangers should have given Hamilton a longer-term deal. I have already read a few predictions of impending doom when the contract ends. Texas won't be able to sign Josh and will end up losing him to a team with deeper pockets.

To be fair, I have no idea if these are the same people who are bemoaning the large contract that Michael Young is under. In the same vein of fairness I can understand why the team might be a little leery of giving Josh a long term deal.

Right now the club is in the midst of an ugly spat with Michael Young. Young still has four years left on his contract and is making more than Hamilton. He is also the longest-tenured Ranger and was supposed to be with the team his entire career. For reasons that are not altogether clear right now, that plan is on hold. Nasty things are being said, a trade has been demanded, and the team leader is definitely not leading. At least not leading in the right direction. With that in mind there is something to be said for not locking the team in on any particular player.

The second hang-up to a long term deal might be more specific to Josh. In the past two seasons he has had some very real injury issues. He managed to put together a fantastic season in 2010 in spite of his time on the disabled list. In 2009 the story was a bit different. Couple that with Josh's past heavy drug usage and there is no telling what his health history might turn out to be. Hamilton admits in his book that he has no idea how his past will affect his health and how long his body will hold up. Texas may be a little concerned that they don't end up with a sizable portion of the payroll tied up on a rehab assignment or on the DL.

Having said all that, I am pumped about the signing. The team has Josh for two more years and hopefully can capitalize on his talent. I would have been just as pumped about a long term deal but I can understand why the team didn't want to go there. What both Hamilton and the Rangers need now is more success. Enough of that and the potential of a re-signing in two years becomes much more of a reality.
Posted by Spiff at 8:02 PM