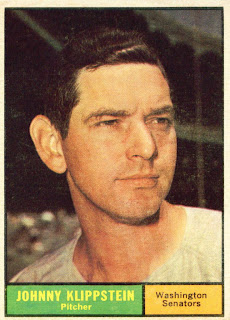 Johnny Klippstein, shown here on card number 539 of the 1961 Topps set, was a traveling man in 1960. In April the Indians purchased him from the Dodgers for $25,000. In the purchasing vein, this was one of the last two cards that I needed to complete this team set and it came in this week. In December of 1960 the Senators selected Johnny in the expansion draft.

Klippstein would make 42 appearances for Washington in 1961. All but one of those trips to the mound would be in relief. In those 42 games he tossed 71.2 innings. That was the second lowest number of innings of any pitcher in the bullpen. That was probably due in part to his 6.78 ERA - the worst of any of the pitching regulars. Johnny also led the league in wild pitches with 10 on the season.

1961 had been a terrible disappointment for Klippstein. His ERA was up by 3.87 points from 1960 and he went from a league-leading 14 saves to none. The Senators must have been a little disappointed as well. A year and a day after they selected him in the expansion draft Washington sent Johnny and Marty Keough to Cincinnati for Bob Schmidt and Dave Stenhouse.
Posted by Spiff at 7:45 PM