Who's gonna be on first? 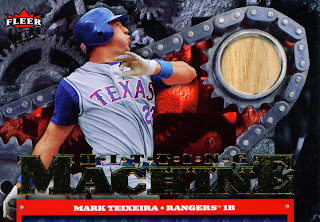 So Albert Pujols and the St. Louis Cardinals didn't reach an agreement by the start of Spring Training. Since Albert doesn't want distractions during the season it is very likely that he will be a free agent at the end of the season.

Of course Pujols is likely to remain a Cardinal but he is looking for an obscene amount of money and that might stand in the way. Wonder who could be out there that might outbid the Redbirds?

According to an article by Anthony Castrovince at MLB.com, one of the top teams coming hard will be the Yankees. No surprise there. Of course the Yankees have Mark Teixeira, shown here on his 2007 Fleer Ultra Hitting Machines card, at first base. Money Man's not bad with the bat but he is no Albert Pujols. The temptation could be there for the Yankees to try and squeeze both onto the roster - especially if the team misses the World Series again this year. Could be an interesting dance to watch.

Anyone care to venture a prediction as to where Pujols will end up for the 2012 season?
Posted by Spiff at 7:34 PM

I'd like to think he'll stay a Cardinal, but I have no idea.

It would be amusing seeing the Yankees try to acquire Pujols and figure out what to do with money bags Tex.

Well I suppose they could DH Tex, but I agree I think he stays with the Cards