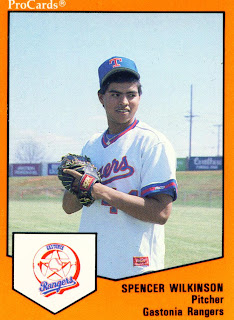 Ok, now that we are done with the 1987 ProCards set it is time to move on to the next minor league set in the binder. That would be the 1989 ProCards set for the Single A Gastonia Rangers. Spencer Wilkinson gets the set going on card number 999 if the set.

A few things about the card itself before we get on to Spencer. First, the orange border. Rather loud. Absolutely clashes with the Rangers' colors. Can't believe it made it into production. It does give the set a minor league feel though so that is good I suppose.

Next, take a look at the background. Most of the cards in this team set use the same background. Probably taken on photo day at the Single A ballpark. What I find interesting is the rise going up to the fence. I'll bet that made for some interesting plays.

The final thing that should be noted is Wilkinson's jersey. It isn't tucked in. Kind of odd. Even more odd is that there are a sizable number of his teammates who are pictured with their jerseys untucked. Not sure what the story is there.

Ok, on to Spencer Wilkinson in 1989. Spencer was the 16th selection in the 1987 draft and played that year in Rookie ball with Sarasota. In 1988 he pitched in 31 games for Gastonia. 15 of those appearances were starts. With the promotion he managed to lower his ERA from 5.91 to 4.86. Neither number is pretty but Wilkinson appeared to be making progress.

Records for minor league ball are sketchy at best and the lower the level the less information there is. That's why I'm not sure what happened in 1989. That season Spencer would make one appearance for the Gastonia Rangers. That appearance would be in relief and he would last one third of an inning. After walking 2 and giving up four hits for six runs Wilkinson's ERA stood at a monstrous 162.00. Those numbers speak of something gone terribly wrong - perhaps an injury. Whatever the case Spencer Wilkson would never pitch in professional ball again. At age 22 his career was over.
Posted by Spiff at 9:01 PM

Posted an article on my blog on the 1983 Texas Rangers that may be of interest to readers here...my blog is at ultimateset.blogspot.com

This guy is one of the most successful men in the state of North Dakota.he sold his company for just shy of 1 billion dollars,he owned a lot of oil rights and had his own comany and manages a casino in ft Berthold reservation, if you do a google search you can read about him? Although a lot of people dislike him because he has done very well for himself in life! He is a great guy and a very good bussiness man! Even after he became on of the richest men in the state(if not the richest?) he still kept his job working in the casino and never let wealth go to his head..all his co workers look up to him and he's very down to earth! So now everyone knows the rest of the story:) thanks for sharing!