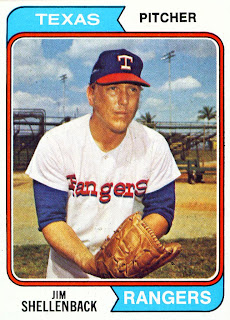 So I have a confession to make. On nights like tonight I don't listen to much, if any, of the Rangers games. These night games on the west coast just leave me dragging the next morning. As such I will be posting another card from 1974.

Today Jim Shellenback appears on card number 657 of the 1974 Topps set. 1974 would be Jim's worst season with the Rangers. All told he appeared in eleven games at the Major League level, all out of the bullpen. In 24.2 innings pitched his ERA was an unsightly 5.84 and his WHIP was 1.703. No wonder he spent as much time at Triple A as he did with the Rangers.

Following the 1974 season Texas sold Jim to San Diego. He wouldn't appear in another Major League game until 1977.

As an interesting side note: Jim was the nephew of Frank Shellenback, a pitcher for the 1918 and 1919 Chicago White Sox. Please refer all questions about Frank to Steve over at White Sox Cards.
Posted by Spiff at 9:39 PM