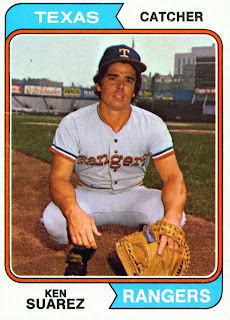 Yes, I know, Colby Lewis pitched a complete game shutout last night to lead the Rangers to victory over the White Sox. I was actually listening to that game and got so wrapped up in it that I forgot to post. Sorry about that. Not very impressive I know.

Today we see a very unimpressed Ken Suarez on card number 39 of the 1974 Topps set. Ken looks like he is about bored out of his mind in this picture. Life as a backup catcher will do that to you I guess. Ken had his excitement though. According to the back of this card he served as a deputy sheriff during the off-season. Can't imagine a professional ballplayer doing that now.

In 1974 Saurez wasn't with the Rangers. After two seasons with the club he was sent to Cleveland in exchange for Leo Cardenas in February of 1974. Not sure what happened there but Ken never played for the Indians at any level in 1974. In September he was sent to the Angels as part of a package that landed the Indians Frank Robinson. He never played for California either though. 1973 turned out to be his last season in pro ball. Maybe that's why he was unimpressed.
Posted by Spiff at 9:42 PM