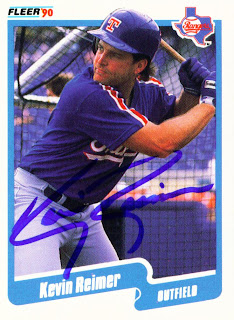 Decided to preempt any posts about yesterday's win. Why would I do that to post this autographed 1990 Fleer card of Kevin Reimer?

Well, I just got this card in today. No big deal you may say, a common player who last played for the Rangers in 1992 and retired after the 1993 season. There's more to it though.

My wife actually called me at work when she found this card in the mailbox. She wanted to let me know that a return had come in. That's rather unusual. It's also unusual that the stamp on the envelope was a 29 cent stamp.

The stamp was a full postage stamp when I sent the card out. The address was the one I was living at. Since then I have moved twice - good thing I stayed in the same town.

Best as I can figure, based on the card, the years Kevin played for Texas, the stamp, the address, my handwriting on the SASE, and the time period that I would have been sending out requests, this card was sent out between 1990 and 1992. A twenty year return! That's a record for me. I would love to know the story on this.
Posted by Spiff at 12:10 PM

Every time I hear a story like this, it gives me hope for the few TTM requests I have floating out there that are now over a year old. But 20 years? Wow!