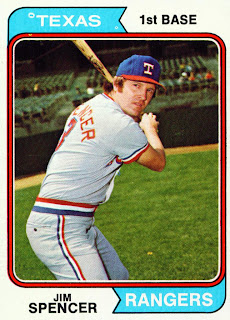 Jim Spencer, seen here on card number 580 of the 1974 Topps set, had a little bit of a problem in 1974. He was competing with Mike Hargrove, the eventual Rookie of the Year for playing time. The contest would not end in Spencer's favor. Two stints on the Disabled List for a total of 18 days didn't help his cause.

Where Spencer lost playing time to Hargrove was at the plate. Not enough to completely fall out of the lineup - he would get 53 starts at Designated Hitter. In his 384 trips to the plate he would post a .278 batting average and a .323 on-base percentage. He hit eleven doubles, four triples, and seven home runs.

None of these numbers were out of line for a normal year for Spencer but Hargrove had turned in a spectacular offensive performance. The result was a lot of DH'ing and backup duties for Jim. If he wanted to get first base back in 1975 he was in for a challenge. Health and increased offense would be where he needed to improve.
Posted by Spiff at 12:15 PM