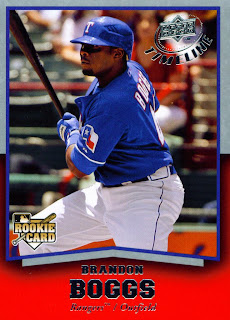 So the Rangers suffered another loss last night. Another bullpen letdown. This could become a habit if they aren't careful.

In order to raise my spirits I finally got to the small bubble mailer that I received several days ago from Night Owl. Included with a stack of cards was a note from the Owl himself. He was hoping that some holes in my collection were filled by what he sent. Of course they were. Owls have great sight and he apparently could clearly see what I needed.

In addition to this 2008 Upper Deck Timeline card of Brandon Boggs I also received several other great cards. A handful of 2011 Topps Heritage, a small poster from Donruss in 2002, a Vlad, Hamilton, and Ryan. All good stuff. Possibly the best card in the lot was a red bordered refractor from 2010 Topps Chrome featuring none other than Elvis. Andrus that is. I think these were inserts so I was excited to get this one in particular.

Thanks a lot Night Owl! Now all I need is the Rangers' performances to start keeping up with yours.
Posted by Spiff at 12:41 PM

Sounds like Rangers and Dodgers are in same boat with regards to relief pitching.

Very happy to supply some cards you needed.