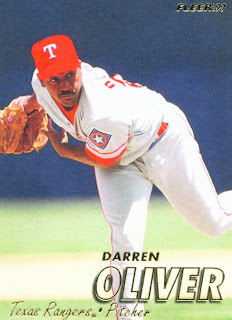 The Rangers were going for a series split today in Oakland. Derek Holland took the hill and went seven strong innings while giving up just two earned runs along with a third that was unearned.

When Derek left he had a 4-3 lead and it looked like Texas was going to put it away. Arthur Rhodes blew the save in the eighth though to tie the game up. Neither team could score in the ninth. Texas couldn't manage to take push a run across with the bases loaded in the top of the tenth.

On came Darren Oliver, seen here on card number 228 of the 1997 Fleer set. One pitch later the game was over as Hideki Matsui parked Darren's first pitch for a walk-off home run. Bummer.

On top of the loss today, this kind of worries me. In similar circumstances Ollie gave up a walk-off home run to Brandon Inge on April 12th. Twice in a month. Not good. Hopefully it's just mistakes and not Darren's 40+ years catching up with him.
Posted by Spiff at 8:46 PM

Sad. And disgusted. It's not a good feeling.