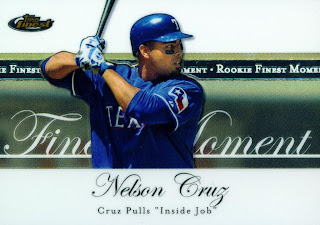 Tonight's game is currently in a rain delay with pretty severe weather rolling through Arlington in the middle of the fourth inning. Since we have some severe weather here as well I decided to go ahead with today's post before I have to shut down the computer.

Posted too soon last night. Apparently Nelson Cruz, shown here on card number RFM-NC of the 2007 Finest set, didn't want to be left out of the return fireworks. As a follow-up to Josh Hamilton's solo home run in the first inning Nelson launched his own shot in the sixth to add two runs to the Rangers lead.

Meantime starting pitcher Alexi Ogando was masterful. He went nine shutout innings to record his first Major League shutout and complete game. That puts him at 5-0 on the year with a 1.81 ERA. Very nice numbers.
Posted by Spiff at 9:15 PM

Labels: Card of the Day, Finest

Nice card. I'm still watching...it's 7-5 in the bottom of the 7th. Maybe they can make a late comeback.